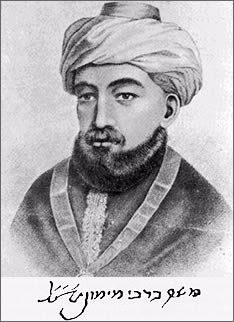 Rabbi Moses ben Maimon, Talmudist, Halachist, physician, philosopher and communal leader, known in the Jewish world by the acronym “Rambam” and to the world at large as “Maimonides”, passed away in Egypt on the 20th of Tevet in 1204 (4965).

On his gravestone were inscribed the words,

“From Moses to Moses, none arose as Moses.”

At a young age, Maimon personally educated his son and brought him to the revered teacher, Rabbi Yosef ibn Migash, known as the Ree Migash, a rabbi in Alusina, Spain (today known as Lucene). Maimonides would later consider him his primary mentor.

In his mid-20s, he began authoring numerous volumes on the Mishnah, which he completed around ten years later. His intent was to assist those who could not understand the Mishnah’s Hebrew and often cryptic text, and for that reason, the commentary was written in Arabic but with Hebrew lettering.

He then wrote a volume in Arabic called Sefer Hamitzvot, listing all of the 613 commandments. These volumes were later translated into Hebrew numerous times, once still in his lifetime.

Prior to Maimonides, in order to know Jewish law, one would have to learn the entire Talmud. And since the Talmud itself as at times indecisive, often incorporating conflicting opinions on Jewish law, it was necessary to then study the various commentaries, which clarified the final law. The famed Rabbi Yitzchak Alfasi, known as the Rif (the teacher of the aforementioned Ree Migash) was the first to codify applicable Jewish law — as a commentary to the Talmud.

The difficulty was, however, that the Talmudic rulings – as well as the aforementioned commentaries – were not organized in a strictly encyclopedic, logical fashion, making research extremely taxing. For example, in order to study the laws of Shabbat by exploring the Talmud, one needs to search through tens of tractates.

Maimonides was the first one to index the entire body of Oral Law – both Talmuds, the various halachic Midrashim, later works authored by the Geonim, and even kabbalistic texts – and compile it all in a logical and systematic fashion. The laws of Shabbat, for example, are all gathered in the third volume of Mishneh Torah (which is titled Zmanim, “Times,” containing all laws pertaining to Shabbat and holidays) in thirty chapters, each divided into bite-sized sub-sections.

Maimonides codified the laws of Shabbat, holidays, prayer, dietary laws, and the laws that regulate the Jew’s daily life. He also wrote a section on eating healthy, fitness, and mental health—teaching future learners that all our actions should be permeated with holiness and Godliness. “The health and wellbeing of the body,” he writes, “is part of one’s service of G‑d.”

The Mishneh Torah also incorporates the basics of Jewish thought and belief.

Another unique component of the volumes is that they are not limited to laws that pertain to our day and age, which constitute only a small part of the 613 biblical commandments, but also include laws that will pertain to the Messianic era, such as the laws of tithing, the Jubilee Year, and the Temple service.

In this area, Maimonides was more than a trailblazer; to this very day the Mishneh Torah remains the only work of this scope. No other work – authored beforehand or afterwards – covers the entire corpus of Jewish law. (Even the commentaries on Jewish law authored before Maimonides omit the laws that were not germane at the time.)

Maimonides also placed great emphasis on making his works available and understandable to all Jews, scholars and laymen alike. He also omitted sources, for brevity’s sake, though later scholars compiled sources for every statement in the Mishneh Torah. Because of his unique style and clarity, he became known as “The Golden Tongue.”

Since Maimonides, many subsequent scholars have analyzed every word and even letter in his volumes. They discuss at length why Maimonides chose to include certain laws, wrote one law before another, and why he chose to include laws in one volume but not the other. Some have speculated that the body of commentary on Maimonides’ volumes could reach the same quantity as Talmudic commentary.

Today, many hospitals and schools across the globe are named after Maimonides; and to this day, students worldwide pore over his scholarly works.

You don’t need a religion to do soul management

You don’t need a religion to do soul management, but having a sacred calendar certainly helps. Far from being an endless list of tasks, the Torah itself is a blueprint for management.Judaism, and especially Leviticus, wants us to build a civilization that prioritizes the parts of us that make us most human – our fragility, […]

More than seven anti-Semitic incidents in the U.S.A. per day

The Anti-Semitism Worldwide Report 2021 and the Anti-Defamation League report about anti-Semitism show the rise of hate against Jews.

The British four-part television drama Ridley Road which premiered on BBC One on 3 October 2021 can now also be seen on PBS. The mini-series Ridley Road is set in the East End of London in the early 1960s and follows the story of a Jewish woman who infiltrates the ranks of the neo-Nazis, posing […]

History of dreaming, and connection with spirit #3

Originally posted on Kone, Krusos, Kronos:
“Your visions will become clear only when you can look into your own heart. Who looks outside, dreams; who looks inside, awakes.” ― C.G. Jung. First let me say, there’s all sort of dreams, provoked by so many reasons, from you being worry about something, that its bothering you,…

Originally posted on Kone, Krusos, Kronos:
The first problem with dreams it’s not how to interpret them, that comes later, the first one it’s to remember them! It’s well known, that as we age we forget everything specially our short memory, I am at that stage, where I can spend many minutes going crazy looking…

On Dreaming, a search for knowledge of the self #1

Originally posted on Kone, Krusos, Kronos:
“God sleeps in the rock, dreams in the plant, stirs in the animal, and awakens in man” Ibn Arabi I wouldn’t even know where to start, this business about dreaming it’s so extensive, let me just say for many years as far back as when I was a child…

Originally posted on Kone, Krusos, Kronos:
“Listen to the Exhortation of the Dawn! Look to this Day! For it is Life, the very Life of Life. In its brief course lie all the Verities and Realities of your Existence. The Bliss of Growth, The Glory of Action, The Splendor of Beauty; For Yesterday is but…

Event: The United Nations general assembly has voted to suspend Russia from the human rights council after images of atrocities apparently showing civilians left dead in the streets with their hands bound emerged following Russian troops’ withdrawal from around Kyiv. The call for Russia’s removal from the UN’s top human rights body was led by […]